Vintage movie buffs may conjure up thoughts of the movie Casablanca, love scenes between Ingrid Bergman and Humphrey Bogart, Nazi spies, and “Play it again Sam” when hearing Morocco’s name. There are no longer Nazi spies - they are long gone and in their place Russia has moved in. Russia began developing close alliances with the Northern African nation of Morocco several years ago.  Whether the draw for Russia is Morocco’s ports that sit on both the Atlantic Ocean and the Mediterranean are the potential draw for Russia or the motive is for Russia to develop a stronger toe hole in the region - maybe both motives are at play. Russia’s motives are for scholars of the region to untangle.

In October of 2017, Russia signed agreements with Morocco on extensive energy deals, as well as, joint security and military cooperation between the two nations and prompting  Russian Prime Minister Medvedev’s appearance in Morocco’s capital for the all-important signing. Medvedev stated to the press, “Morocco remains our strategic partner in the Arab world and Africa in general.”  Morocco’s prime minister is also enthusiastic over the deals made with Russia and responded Morocco was, “optimistic about the new dynamic of relations with Russia.”
The budding romance between Russia and Morocco brings us back to Trump’s appointment of David T. Fischer Jr.  Fischer was the Michigan financial head for Mitt during Romney’s 2016 presidential run. Fischer was often photographed alongside Scott Romney and another Romney insider, Michigan’s Governor Rick Snyder.  A Fischer family member also played a role in helping to carry out an illegal deal made with members of Livingston County legal community to suppress a sexual assault on a child – in essence, the Fischer family member became one of the enforcers of the illegal deal.  Link here to blog piece http://michiganmisconduct.blogspot.com/2016/05/district-judge-suzanne-geddis-needs-to.html 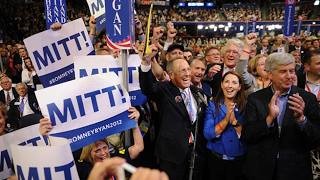 There are also many lingering questions of David T. Fischer Jr.’s deep involvement with the Romney family and if Fischer had involvement with the Romney family’s deep ties to Russian intelligence through an import-export company in Michigan headed by a former Soviet administer from St. Petersburg, Russia.  Oleg  Lobov sits on the board of the import-export company. Oleg  Lobov is linked to sarin attack in Japan, his bio below:
Education: Ph.D. in Civil Engineering
Honors: Honorary Builder of Russia, Honorary Academician of several Russian and foreign Academies.
1997-pres. Association of International Cooperation, Chairman.
1987-1997 Deputy Prime Minister of Russia;
Minister of Economy of Russia;
Secretary of the Security Council of Russia;
Special Presidential Envoy in Chechnya

Fischer isn’t the only Romney insider selected by Trump. To date, Betsy DeVos, a longtime Romney family friend and political ally, was selected as Education secretary. DeVos selected another Romney insider John Engler, a former Michigan governor, for her staff. Ronna Romney McDaniel, the daughter of Scott Romney and Mitt’s niece, was tapped by Trump to be the chair of the National Republican Committee.  Romney political ally former Michigan Congressman Pete Hoekstra, Trump picked for Ambassador to the Northlands. And Jon Huntsman, a fellow Mormon Church member of the Romney’s, was tapped as Ambassador to Russia. Huntsman has another tie to the overall Russian connection with the Michigan Romney factions that became involved with business deals with Russian import-export company.  The complex story of Romney family members involvement, the Russian import-export company, the many executives, corporations, and politicians that became entangled is told in our book Betrayal Of One’s Family And One’s Country. 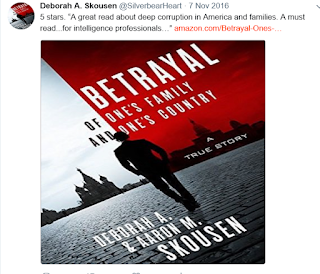 Posted by Debbie (McCord) Skousen at 12:35 PM No comments:

Russian influence in the GOP began with an import/export business my former husband and Scott Romney, Mitt Romney’s brother, were involved. The import/export company located in Michigan became a direct pipeline to the Kremlin. Russian influence in the GOP began with the Romney family nearly two decades ago. The president of the import/export company is a former Soviet administrator from Leningrad groomed by Yeltsin and a peer to Putin.
This contact with the Russians was made BEFORE the fall of the Soviet Union. I had many years of experience with the import/export company that served as a direct pipeline to the Kremlin.  A Russian that is intelligence sits on the board of the company and tied to the Sarin attack in Tokyo by Aum Shinkriko. Aum Shinrikyo had more members in Russia than Japanese members in Japan. Many of the Russian members were former KGB.
My former husband, Samuel Jan Skousen, was, and is, deeply involved with the import-export company, and in essence, acted an asset for the Russians. The lives of my children and I were ruined because of tie to this company and the Romney family. A Russian-controlled import-export company that many high-level GOP politicians ran business contracts through, and tightly connected also to the Romney family.
This and more is discussed during the interview discussing book Betrayal Of One’s Family And One’s Country.

Second interview with Cat Watters on February 1, 2016. Keep in mind while listening to the second interview often when Russia is wanting to take control to take control of a country, they move in Russians into that country. As Russia did in the Caucasus, Georgia, and Crimea. Other topics and individuals discussed are from our book Betrayal Of One’s Family And One’s Country and part of our family’s overall story. Henry Ford II, Alfred Taubman, Max Fisher, and the Romney family are discussed.

Posted by Debbie (McCord) Skousen at 7:18 PM No comments: