District Judge Suzanne Geddis needs to be removed from the bench


This is a short summary of the judicial grievance I filed this week against District Court Judge Suzanne Geddis. The problems with Suzanne Geddis have been ongoing since 1997, with the same nucleus of players involved.

While serving as a Livingston County prosecutor, Suzanne Geddis with full knowledge took a falsified police report and prosecuted me as a ‘special favor, in violation of Michigan Rules of Professional Conduct 3.8 (a).  The case became a parental rights test case regarding the parental discipline of a teenager. My daughter had stayed away over the weekend with her boyfriend without permission and called me a ‘fucking bitch’ when refusing to tell where she had been for the weekend. Prosecutor Geddis charges occurred just prior to a divorce action between Samuel Jan Skousen and me. I am aware my daughter foolishly was manipulated.
While facing charges, after a court hearing, Livingston County Prosecutor William McCririe II, threatened me in the hallway of Livingston County court stating, if I did not plea ‘no contest,’ he would raise the charges. Prosecutor William McCririe’s II, threat was in clear violation of MCR 6.302 (A) Pleas of Admission and No Contest Rule 6.971 (B, 1&3) and Criminal Procedure in District Court Subchapter Pleas of Guilty and Nolo Contendere 6.320(C) (E); these violations were never disclosed to me by any legal representative
Samuel Jan Skousen, the day of McCririe’s threat, came home from work telling me, “We thought you would collapse in court today and make a plea.” My husband didn’t reveal whom he had spoken with during the day, informing him of McCririe’s threat and my refusal. The amended charges of aggravated assault were in clear violations of civil rights – and no legal representative ever informed me of the violation. On June 30, 1997, as part of heightened intimidation and prosecutorial overreach, William McCririe II’s threat was carried out. The charges were amended to Count 1 Domestic Violence- Aggravated stating, “…Did assault REBECCA SKOUSEN a resident of her household, without a weapon, did inflict serious or aggravated injury upon her, but without intending to commit murder or to inflict great bodily harm less than murder; contrary to MCL 750.81a (2); MSA 28.276. (2). [750.81A2]. MISDEMEANIOR: I year and/or $1,000.00.”
The initial charge entered into court nor the later amended charges fit the criteria needed for sufficiency of evidence to levy charges. The amended charges of aggravated assault were in clear violations of civil rights – and no legal representative ever informed me of the violation.  According to the law:
Offenses- assault, Aggravated
“Aggravated assault requires no specific intent to inflict serious or aggravated injury. People v Complan, 38 MA 289, 300 (1972) The need to seek immediate medical attention is only one factor used in determining whether the element of serious or aggravated injury is established. People vs. Brown 97 MA 606 (1980)
The element of “serious or aggravated injury” is met by the introduction of testimony that showed the victim injuries constituted a substantial bodily injury, which necessitated immediate medical treatment or caused disfigurement, impairment of health, or impairment of any bodily part…. People v Brown, supra.”
Dr. Kimovec's medical report stated there was no bruising, welt, edema or red mark and no immediate medical emergency or was there immediate medical attention sought—there was nothing!  Suzanne Geddis maliciously prosecuted me with a falsified police report written by another Livingston County insider, State Trooper Paul Rambo. I was told Prosecutor Suzanne Geddis charged me as a special political favor and directed my prosecution.
After a jury found me innocent, the prosecutor’s office continued their attack. In March of 1998, the daughter of Livingston County prosecutor Daniel Garber, Katie Garber, printed a defaming article against me in the Growler, Brighton High School’s student newsletter, that contributed to my youngest son being chased out of the high school. Livingston County Prosecutor Daniel Garber on September 5, 1997, acted as the plaintiff  during the final settlement conference.  Suzanne Geddis’s father-in-law, William McCririe, a Brighton attorney, represented Brighton Area Schools as their attorney for several decades.
The prosecutor’s office continued making false statements and had their lies printed in the Brighton Argus, Livingston County Press, and later in the Livingston County Daily and Argus, where they have close connections— inflicting as much retaliatory harm as possible.  Newspaper articles continued for the next 17 years.
Suzanne Geddis and her husband, William McCririe II, have a long and systemic record of working to defraud me by using their legal positions in Livingston County. They have used the Livingston County legal system, as their own fiefdom to inflict maltreatment, duress, and financial fraud on an innocent target in and out of the court proceedings. 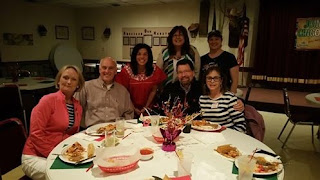 In August of 1998, Samuel Jan Skousen and his attorney David Morris wrote a letter demanding me to sign a real estate agreement to have Gary McCririe act as real estate agent to sell my home in Brighton. None of the legal parties involved in the case, nor Gary McCririe disclosed his family relationship to Prosecutor Suzanne Geddis and his brother Prosecutor William McCririe— both of whom were behind my prosecution.  I was unaware for many years Geddis and William McCririe II were married. My home was slated to sell $250,000.00 to $300,000.00 below market value in an attempt to defraud marital assets from the home, even though I had paid for a home appraisal by a bank appraiser. The bank appraiser’s appraisal was for $250,000.00 more than the price point, the attorneys, as well as, Mr. Skousen and his agents wanted the home to sell.  (The real estate agreement sent by David Morris to have Gary McCririe as Real Estate Agent is attached to Judicial Grievance along with David Morris letter)
With the protection and blessing of the Livingston County court, Mr. Skousen was able to hide and bury $350,000.00-$500,000.00 in marital assets – maybe more, in addition to the marital home. Mr. Skousen has boasted he had a connection within Livingston County courts, and that “palms were being greased.”
It is important to note, around the time my trial, Suzanne Geddis and her husband William McCririe II adopted two healthy Russian children they named Bill Geddis McCririe born in Podoisk, Bashkortostan, Russia, and Alexandria Geddis McCririe. Leaving the strong impression while acting in the capacity of Livingston County prosecutors, Suzanne Geddis and her husband, William McCririe II, acted on behalf of an agent of a foreign government using the Livingston County Court system to discredit and harass. See blog piece Bain, Alex Itkin and Samuel Jan Skousen and Russia   http://michiganmisconduct.blogspot.com/2012/10/romney-romney-family-sam-skousen-bain.html
District Court Judge Suzanne Geddis did wrongfully and with full knowledge of her conflict of interest, took the case of Skousen vs. Skousen from the Family Court division of Circuit Court, after the death of Judge Charles W. Jameson in violation of MCR 2.003 (B) (1) (5) and Michigan Code of Judicial Conduct Cannon1& 2..
Judge William Jameson, a Lenawee County judge, was brought into Livingston County after a conflict of interest involving Livingston County Court Judge Carol Hackett-Garagiola. Scott Romney was contacting the court and Mitt Romney gave an exclusive interview to Channel 4 newscaster Steve Garagiola, the husband of Judge Carol Hackett-Garagiola.
District Court Judge Suzanne Geddis during a January 28, 2016 interview with journalist Lisa Church stated in a news article, “… one judge keeps all pending files—for one family...,” The concurrent jurisdiction Judge Geddis referred to in the article as, “has been amazing,” opens the opportunity for Judge Suzanne Geddis to bury wrongdoing. Enabling District Court Judge Suzanne Geddis to continue misconduct and maltreatment she began in 1997, allowing her to alter, destroy and withhold documents, as well as, inflict permanent and irreparable harm to Deborah A. Skousen. 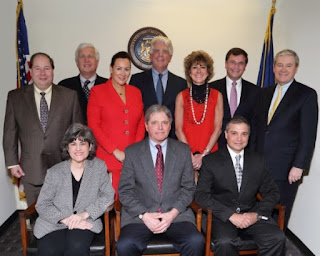 Livingston County Chief District Court Judge Theresa Brennan acted as judge over the foreclosure of my home, which Samuel Jan Skousen put into foreclosure. Michigan Judicial Tenure Committee member, David T. Fischer Jr., sister-in-law, Julie Fischer, was appointed to sell my home in foreclosure. Money is still missing from the sale of the home that was over and above the mortgage owned. After leaving the last hearing held by District Court Judge Brennan, while leaving the courtroom,in the hallway 5-7 Livingston County deputies surrounded, preventing me from leaving the building, for no other purpose than to harass.  A few months ago, a relative Chief District Judge Theresa Brennan harassed me, it is clear he harassed on behalf of the Livingston County court personnel involved.
Photo of Suzanne Geddis and Livingston County Sheriff Robert Bezotte. 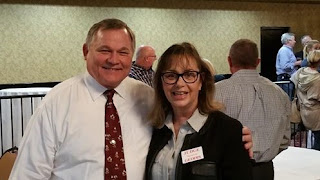 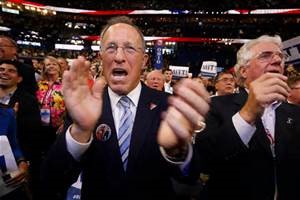 I am well aware of other complaints regarding Judge Suzanne Geddis, one from Howell area attorney Tom Kaiser Jr.  In 2006, Kaiser alleged retaliatory actions against him by Judge Suzanne Geddis for not supporting her husband’s, William McCririe ll, run for Livingston County judge.  Kaiser asked for ‘superintending control’ over Geddis. Kaiser also alleged Geddis was misusing the Drug Court in Livingston County. Kaiser filed a Judicial Grievance with the Michigan Judicial Grievance Commission and a complaint with the State Court Administrator. Investigations into Geddis were dropped.