A protest was held outside the Michigan Northville Ward of the Church of Jesus Christ of Latter-Day Saints at 31450 Six Mile Rd., Livonia, Michigan on Mother’s Day. The protester, is the son of Samuel J. Skousen. His protest was to draw attention to the abuses of female members of his family and mentioned involvement of Samuel J. Skousen as well as the Romney’s. Members of the Romney family and Samuel J. Skousen, not only share membership in the Mormon Church in common, but also have long business associations and involvement in assaults and covered-up on female family members of the protester.

The last line of the letter personally handed to Bishop Ostroaff read "I am protesting on Mother's Day to draw attention to the situation and how the church has condoned my father's actions towards my mother."


Additional details on the protest will be in future blogging posts.
Posted by Debbie (McCord) Skousen at 10:10 AM 2 comments:

Yes, Ann Romney is your typical every day mom. Every stay- at- home mom had a home valued, in today’s dollars at $400,000.00 while hubby was attending college, vacations, and cool clothes. We all knew the sacrifice of dipping into our sacred trust-funds to pay for such basic necessities as cash strapped married college students. After all that IS paying ones way through college. No slumming with the students with brick and lumber books cases, and broken second hand sofa’s, or married students trying to figure out where their next meal of mac and cheese would come from.

But Ann! That blouse! 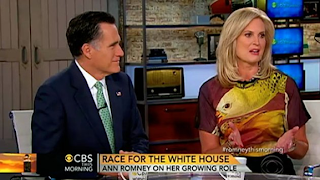 One has to question Ann’s tastes in blouses! Is that a snake curling its body around Ann’s bosom? A fish? Or maybe a turtle? I can’t tell. As a stay- at- home mom there is no way in blazes I would buy a thousand dollar blouse especially one that ugly. Heaven forbid what Ann would do to the White House!

As a stay-at-home mom, who raised five children, I can empathize with Ann’s eternal sacrifices. Well, actually I cannot. I have stated myself Ann never worked a lick in her life. And I will stand by my view. As a woman who suffered through the Romney’s wives talks during Relief Society meetings in the Mormon Church, as they spoke about their dishwashers and conveniences that make their housework light and how lucky us stay-at –home mom’s lives were in this modern age. I would look down at my hands red from washing dishes.

Ann Romney’s Stay at home mom The $1000.00 blouse must have been a birthday gift Ann gave to herself.

The Romney’s with their wealth and privilege - privilege they have seized by the ill use of others, have no concept of others circumstances or empathy for women outside their immediate circle.
Posted by Debbie (McCord) Skousen at 7:44 PM 2 comments: