Michigan pulls another insane move. Carl Levin was appointed the mediator for the first Flint Water lawsuit. This isn’t bold, it is downright corrupt. Shame on former Senator Carl Levin for not excusing himself from this case. After leaving the US Senate, Levin took a position at Scott Romney’s law firm in Detroit, as did, Dennis Muchmore, Governor Rick Snyder’s former Chief of staff. Muchmore is linked to the Flint Water scandal. Dennis Muchmore and Carl Levin work at the same law firm in Detroit that Scott Romney is a partner and work together training the law firms attorneys in the art of lobbying. And was reported in Crains Detroit in an article by Lindsay VanHulle on January 30, 2016, “The role will require leading a team of attorneys who specialize in such business policy areas as health care, gaming and hospitality…. Honigman's new faculty team also will include former U.S. Sen. Carl Levin, who joined the firm in April as senior counsel; Lansing-based attorneys John Pirich, Joe Garcia and Andrea Hansen; and Detroit-based attorney Khalilah Spencer. “

Of course, several of the attorneys at Scott Romney’s law firm, as well as Scott, is deeply connected to Russian issues detailed in our book. In addition, I have faced over 20 years of courts and judges corrupted by this Romney linked group as they stacked the deck with aligned attorneys and judges. I am aware they don’t expect people to connect the dots. It may take protesting outside these corrupt people homes since these un scrupulous individuals are completely emboldened.
Link to tweeter feed I tweeted earlier this week on the subject.
https://twitter.com/SilverbearHeart/status/951029258633216000 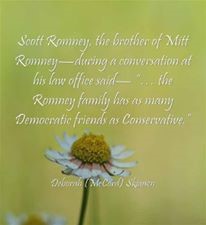 Is stacking the deck typical?

Is Romney in the background stacking the deck? David T. Fischer appointed to the Michigan Judicial Tenure Commission
https://michiganmisconduct.blogspot.com/2012/07/is-romney-in-background-stacking-deck.html