Romney was in San Diego yesterday stopping at Desert Book Store, which is owned by the Latter-day Saints Church, to promote his book. Romney was met outside the bookstore with a protest from the Gay and Lesbian Community, denouncing Romney's flip and his churches stand against the gay community.

It is hard to find greatness in Romney, who blandly insults the intelligence of both the Christian and Gay community. Romney ran on a pro-gay rights platform, during his 2002 race for governor in Mass., as reported by Bay Windows. During “Pride Week”, Romney’s campaign was out in force handing out fliers promoting rights for the gay community and soliciting their votes. 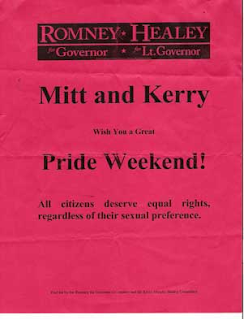 "During his 2002 gubernatorial run his campaign distributed bright pink flyers during Pride weekend that declared 'Mitt and Kerry [running mate Kerry Healey] wish you a great Pride weekend! All citizens deserve equal rights, regardless of their sexual preference.' Romney also argued that he would not only support gay friendly policies but would fight on behalf of the gay community to secure benefits such as domestic partner benefits and hospital visitation rights for same-sex couples."
- Bay Windows 3/3/2005

Romney had a change of heart when he no longer was enamored with the Governorship of Mass., deciding to run for the bigger brass ring of president. Mitt flipped, taking stands against the gay community, in an effort to win over the Republican conservative vote.

“First, launching a divisive, impractical, PR-driven campaign to repeal health-care reform at the same time you're calling for "a new kind of politics" is just a little bit contradictory, so it only reinforces the perception that Romney is a soulless automaton willing to say anything to get elected. And second, what Romney is actually saying—what he's actually accusing Obama of—doesn't make any sense”

None should forget, Romney declaring the health-care Mitt passed in Mass, which is essentially the Obamacare plan, as "the ultimate conservative plan" --- Romney’s statement is a bit bellicose.

The flips, twist, spins, denial, and projection Romney is involved in, are a ‘red flag’ and the American people should be taking note. Until Romney is able to exorcise the demons which posses him, people should be warier of being drawn into Mitts cognitive dissonance.